Tapping Into The Craft Beer Trend 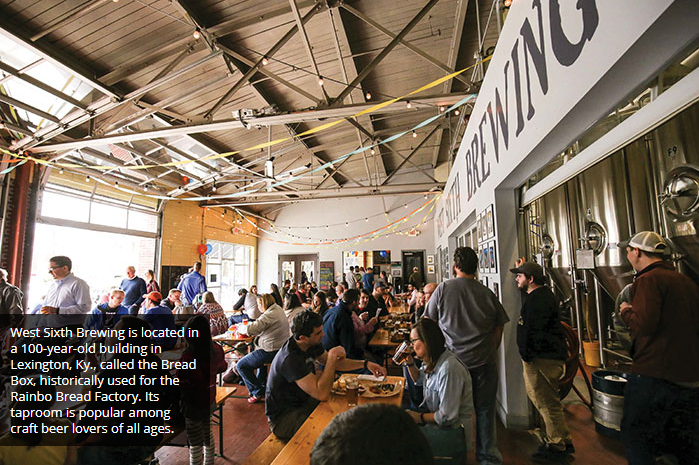 A 150% increase in barrels of beer brewed in Kentucky between 2017 and 2018 foreshadowed announcements of further solid, steady growth for 2019. At mid-year, the Kentucky market was continuing to see announcements of new local brews and especially brewpubs and breweries looking to be destinations.

Even so, Kentucky remains in the Top 10 Least Brewery-Dense States (Beer & Brewing.Com), making it a land of opportunity.

Entrepreneurs Johnathan and Dominque Shrader of Noble Funk are pushing into the SoBro neighborhood in Louisville, preparing for an early 2020 launch. They follow a trend of brewers looking with confidence and high expectations for a seat at the table in up and coming neighborhoods throughout the state.  According to a recent Gallup Poll, 65% of Americans of drinking age consume alcohol each month and most are looking for new options.

When it comes to packaged product, Dauntless Distributing is the Kentucky operation that deals exclusively in craft. Dauntless Distributing reports that Kentucky craft aficionados do drink at home and like to buy local products, which are shifting from liquor stores to the growing product selection at groceries and large retailers. Industry analysis indicates that there is still tremendous room for growth in the off-premise categories for craft brewers throughout the state. Statewide distribution efforts generally come before national efforts for local breweries and lagers are the baseline for those trying craft beer at home.

“Everyone has access to online information on craft beer, and people will go to the source to try the product before buying packaged product,” said Michael Minton, owner of Dauntless. “Quality and identity are key to success for the area brewers.”

The state tracks its microbreweries on its tourism page: kentuckytourism.com/ky-taste/craft-micro-breweries. Lexington has its own Brewgrass Trail for beer lovers, with 15 attractions and growing. The state Department of Agriculture is in discussion with brewers about a more extensive Kentucky beer trail to come this year. In the meantime, the Kentucky Craft Bash Beer Festival, hosted by the Kentucky Guild of Brewers, has become an annual event.

The state is now home to approximately 61 breweries and brewpubs, including those open and nearly open. Louisville has 16 now, and within another six months breweries like Noble Funk in SoBro and Logan’s Street Market in Smoketown will open, offering new brews, venues and food.

After a late start, pour it on

Nationally there’s a craft beer slowdown, with only 5% growth each year, but in Kentucky the growth outlook is more like 30% a year. “We got started later,” explains Derek Selznick, executive director of the Kentucky Guild of Brewers.

Statewide imports are still considered part of the craft beer categories, Selznick said, and the Mexican imports are up, as are Mexican-style lagers overall, with Modelo being first in the country in this category. West Sixth in Lexington last year began canning its Cerveza, a light Mexican lager.

Kentucky craft lagers like Goodwood’s Pilsner, Against the Grain’s Retitled Pils and Falls City Pilsner are taking off as well. The fastest growing and largest craft beer for the state is Alltech’s Lexington Brewing Co. Bourbon Barrel Ale.

For women – still an emerging group of beer drinkers in Kentucky and nationwide – all manner of sours are up statewide: lambic beers, gose, oud bruin, red ales, Berliner Weiss, American-style sour (fruity blends) and even alcohol-infused seltzers. These tend to vary often and are small batch by nature.

Still, not everything is rosy for the area’s brewers.

“There is shared interest in breweries in the area, but loyalty is down and the consumer is promiscuous,” Selznick said.

As a result, marketing tends to be regular and consistent in form and includes events that mesh with each brewer’s audience. The Gravely Brewing Co. in Louisville has done well with its trivia nights, while Goodwood Brewing Co. offers live music, an open-mike night and yoga classes. The special interests of brewery owners often become the special interests that work. These are then branded and promoted in social media outlets and inside the brewery.

“Not all breweries have to be loud with crazy loud music. We are dog-friendly and it’s a draw,” said Greg Hayden, an owner  of 3rd Turn Brewing. “And, there doesn’t have to be a flagship beer on tap.”

About half the 3rd Turn tap menu is their own brew with the rest predominantly Kentucky craft.

At 3rd Turn’s Oldham County location, it sees up to 600 people at a time in its garden atmosphere in the summer months, with special events such as weddings and parties. The company is expanding at both its Oldham Gardens locations with more event spaces and a bourbon-and-beer concept next door to its existing J-town location by the end of 2019.

Many varieties, lots of collaboration

Not every brewery wants its products on tables across America. But some have geared up for expansion, like Goodwood. The company grew distribution into North Carolina this summer and is partnering with Freedom Beverage Co. for statewide coverage. “We’ve seen the impact from (the popularity of) bourbon into the craft category,” Selznick said. “It’s the 40-plus (age cohort) who have the most disposable income for local brews, and they are looking for a quality product.”

The single-drink price sweet spot is around $4 to $6 these days.

The category list for craft brews is now into the hundreds, with an industry beer style guide published each year to assist brewers and consumers alike. Some brewers have collaborated to extend their reach. For example, a few years ago Lexington-based Country Boy and West Sixth Brewing issued Country Western, a bourbon-barrel brown ale made with Kentucky sorghum.

Brian Holton, co-owner of Monnik Beer Co. in Louisville, serves his flagship brews year-round, generally seven or eight varieties, with rotating and seasonal brews constituting another seven to 11. There are generally 15 to 19 beers to choose from at any time, and he has expanded his distribution throughout Kentucky and into Indiana (Clark and Floyd counties).

Monnik’s canned and bottled products range from Saisons with a cork to IPAs in a can. (Saison is a pale ale that is highly carbonated, fruity, spicy and often bottle conditioned.)

Holton started his adventure in Danville in 2011 at Beer Engine, a brewery and bar. He plans to close Beer Engine later this year – it has been hard to run from a distance – but is wanting to expand the Monnik brand, which has grown more strongly. He’s now up to 40 employees, including those in Danville.

“More than 60 percent of our beer drinkers are repeat business from the neighborhood,” Holton said, sitting in the Schnitzelburg district of Louisville a few miles southeast of downtown. “It’s the young business professionals as consumers who make for a success.”

New flavors of marketing, too

“We were brewing six months before we opened and started serving food. This was a strategy to entice the locals to try us out,” Holton said. “It’s hard to grow into retail production on every shelf, but we will grow both.” The 55 and older set tend to know what they like and stick to categories of craft beer. IPAs, while not necessarily a growth category, appeal to the older crowd and are must-have, year-round mainstays for brewery taprooms. Holton’s No. 1 seller is always an IPA. Orange-flavored varieties are more popular in the spring and summer months. Stouts and porters are mostly winter drinks for many in this category.

While beer and food seem to go together, a number of breweries just do beer, like Mile Wide Beer Co. in Louisville. Others try unique partnerships, like Gravely Brewing Co. and Mayan Café: A permanent food truck in Gravely’s outside area is devoted to Mayan street food.

Gravely’s slogan is “Fresh Beer Is Everything,” but it decided this year to bottle some of its varieties. There are now at least 16, plus on-off specialty runs. The company is looking at canning or bottling for its greatest hits, including Power Chord, Debaser, Doc’s Hefe, La Bamba and Blood Orange IPA. Management will still do beers for band series, but the sights are set on statewide distribution.

HopCat, a beer bar chain (16 locations in Michigan, Kentucky and Florida) that has two locations in Kentucky, caters to family gatherings and makes sure to carry about 50% local product on tap.

“We have an opportunity to educate people about craft beer, and that’s kinda fun,” said Adam Roberts, HopCat’s regional beverage program manager. This includes a weekly radio show slot on a popular Lexington rock station, with the DJs trying to guess the variety and alcohol content of several mystery beers.

As for the best beer bar in the Bluegrass? With virtually no signage but 1,700-plus selections, Sergio’s World Beers in Louisville has become a top beer destination internationally, according to RateBeer, and has been rated best in the state in recent years.

Kentucky craft brewing by the numbers