For retailers and distribution centers of all sizes and maturity levels, making the shift to eCommerce has been—and continue to be—one of the most challenging hurdles to jump. And the reason is clear: Pursuing an eCommerce strategy will require many businesses to convert their supply chain from single-channel to omnichannel, which can further complicate an already complex set of processes.

But however challenging eCommerce is, few retailers or industries can afford to disregard it as a part of their business. Simply put, eCommerce is here to stay, and most retailers will need to figure out what role it should play in their operations if they are to remain relevant and successful in today’s global economy.

Below, we discuss some of the most intriguing statistics that will help you frame the discussion around the role that eCommerce has played and continues to play in the world of order fulfillment.

How eCommerce Is Affecting Consumer Behavior and Shaping Global Retail

Ever since Amazon and other online retailers introduced the world to eCommerce en masse in the early 2000s, there has been a dramatic shift in customer expectations and behaviors. Though some of these shifts may seem insignificant, taken together, all of these changing expectations and behaviors have had a significant impact on the way many order fulfillment operations do business, creating a feedback loop encouraging even more business to be done online.

Below, we explore some of these most significant changes, and the impact that they are having on global retail.

The reason behind this? From two-day shipping to next-day to same-day, customers have grown accustomed to a slew of rapid delivery options made available by the giants of eCommerce. They want what they want, and they want it as quickly as possible. If a retailer isn’t capable of meeting that demand, the customer is more than capable of turning elsewhere to find someone who can.

2. Nearly a quarter (24%) of online shoppers would abandon their order if no delivery date was provided. (Source)

In eCommerce, as in virtually any industry, consumers like transparency. Businesses who are transparent are rewarded for that transparency with a customer’s business. Case-in-point: If you are not transparent about with your delivery date expectations, up to 24% of customers may refuse to do business with you.

3. 69% of consumers are less likely to shop with a retailer in the future if a purchase is not delivered within 2 days of the date promised. (Source)

A promise is a promise, no matter how small. If a customer places an order with you and you are unable to fill it within 2 days of the expected delivery date, there is a good chance that they will not become a return customer. (This may be particularly true of new customers who have never bought from you before.) Why? Because by breaking your promise to deliver the order within the specified time-frame, you have failed to build trust with the customer.

4. 25% of online shoppers will abandon their order due to unexpected shipping costs being added just to the order just prior to checkout. (Source)

As with #2 above, this, too, boils down to transparency. Customers want to know ahead of time what they will be expected to pay for their order; that’s how they budget their purchase in order to determine what to buy and who to buy it from. Springing a surprise delivery fee on them at checkout can appear underhanded and shatter the trust you have built with the customer.

5. 63% of online shoppers cite excessive shipping fees as a reason that they have canceled a purchase. (Source)

Customers have become very accustomed to the free or discounted shipping fees offered by many commerce companies. This presents retailers with a challenge: Either pass the shipping fees on to customers and risk losing the sale, or eat the fees themselves and make less money (or even lose money) on the sale.

For retailers with a footprint of physical, brick-and-mortar stores, there is another option: Leveraging that existing infrastructure to increase customer choice and reduce shipping costs by using individual stores as distribution nodes for last-mile shipping, or by pursuing a buy online, pick up in store (BOPS) strategy.

6. 74% of online shoppers say that free shipping is one of the most important factors at checkout, and 94% of have taken some type of action to qualify for free shipping. (Source)

This means that retailers who give customers an opportunity to qualify for free shipping—whether by adding items to their cart, creating an account, or completing some other type of action—will likely be able to retain some business that they would otherwise lose.

Because margins are typically higher for orders consisting of multiple units compared to single-unit orders, implementing some sort of free-shipping threshold (for example, where customers receive free shipping on orders of $50 or more), it is possible for each order to be more profitable for a retailer, despite the added shipping costs.

7. For online retailers, the average cost to fulfill an order is 70% of the average order value. (Source)

Between labor costs, overhead, inefficient order splits, returns, and other expenses eating into profit margins, the average ecommerce order is far from as valuable as one might expect. For many retailers, minimizing these costs wherever possible through the use of smarter technology and processes can lead to substantial gains in profitability.

Compared to the $1.3 trillion in total B2C eCommerce sales that was done in 2014, that’s an almost 250% increase. And this growth is only likely to continue as global technology infrastructure continues to improve and more and more people find themselves capable to making purchases online.

This figure should put to bed once and for all the once-pervasive myth that eCommerce was restricted to the world of B2B.

This is not to say, however, that the total volume of eCommerce sales in the United States is going to decline. What the DTA does suggest, though, is that eCommerce sales are going to continue to rapidly increase elsewhere around the world—including, notably, in Asia.

11. 57% of consumers say that they have made an international purchase online in the past six months, including 45.5% of North American online shoppers. (Source)

This is slightly lower when compared to the other continents surveyed—Europe (63.4%), Asia-Pacific (57.9%), Africa (55.5%), and Latin America (54.6%)—likely due to the fact there are fewer countries in close proximity. Regardless, these numbers show that it is possible for even U.S.-based retailers and operations to penetrate brand new foreign markets, so long as a global supply chain is put in place.

12. An estimated 165 billion packages are shipped in the United States each year. (Source)

With a 20% year over year increase (as current trends indicate) the total number of packages shipped in the US each year could reach 285 billion by 2021, leading many municipalities and companies to wonder whether existing infrastructure can support the demand.

13. In an eCommerce setting, products can be manually handled 20 times or more. (Source) This increased handling means that the average eCommerce package is now dropped 17 times. (Source)

In a traditional retail setting, on the other hand, product is handled (or “touched”) approximately 5 times on average. This increased handling has led to a number of evolutions in packaging as manufacturers and order fulfillment operations aim to reduce the chances that product will be dropped or damaged while also utilizing packaging that will not damage their various automation technologies.

The statistics discussed above help to put into perspective just why developing an effective eCommerce strategy is so important for modern retailers. Below, we provide some additional statistics about the so-called “royalty” of eCommerce—companies that are leading the pack in eCommerce—to see what lessons other retailers can glean.

14. As of April 2018, Amazon Prime has over 100 million subscribers all over the world (Source), and some industry analysts expect that number to nearly triple to 275 million over the next decade. (Source)

Amazon originally created the Prime loyalty program to provide free two-day shipping, and consumers rapidly signed up. In the years since, the company has added a number of ancillary benefits, including free music and movie streaming, ebook downloads, and more, but at its heart, the free shipping is what draws customers to Prime. Which is a good thing, because…

It is difficult to pinpoint a precise reason for this fact, but it is a reasonable assumption to believe that Prime members make more purchases over the course of a year in order to “get their money’s worth” from their membership dues.

Which is a truly astounding volume of goods, no matter how you look at it. Unfortunately, these numbers only reflect the goods shipped through Prime; Amazon does not currently report the total number of goods that it ships annually, which could offer interesting insights.

And they expect their shipping costs to continue to rise in the years to come. This is an unsustainable trend for any retailer or fulfillment operation, and the primary reason that Amazon is looking for ways to cut their costs—through a mix of automation, by using technology such as AMRs and AS/RS to boost efficiency, as well as by creating an in-house delivery service.

18. Walmart’s digital sales grew by 43% in Q3 of 2018, and the company expects to finish the year with total eCommerce sales growth of around 40%. (Source)

To put this into perspective, Amazon grew by approximately 11% for the year, after growing at nearly 22% the year prior.

Much of Walmart’s eCommerce success has been attributed to their acquisition of already-successful online retailers (such as Jet.com and Shoebuy.com) as well as the fact that the company has an extensive footprint of stores worldwide that can be leveraged for various types of omnichannel fulfillment.

While Amazon is currently “winning” the eCommerce battle in terms of overall market share, it remains to be seen who will be victorious in the long haul. In the meantime, each company presents a model of eCommerce fulfillment for other retailers to learn from.

Read the entire article on Conveyco's site by clicking here. 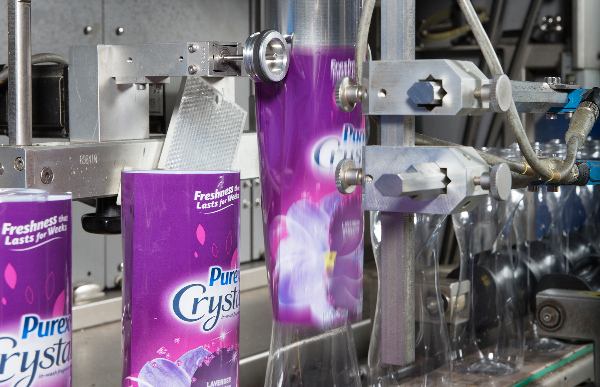 Thinking about shrink for your next labeling project? The capital investment can be significant, so choosing the most qualified shrink sleeve decorator is imperative. Be sure to keep in mind these...

You could do your post-fill decorating in-house – undergoing a long learning curve and running the risk of decreased efficiency and increased scrap. Or you could reap the productivity and...

Have you already decided that shrink sleeve labeling is right for your product? If so, have you selected the right shrink partner? Should you go with automated or hand applied labeling?  Find out...